--- --- Announcing the OSM US Trails Working Group | OpenStreetMap US

In recent years, many more people have come to rely on mobile apps such as Gaia GPS, AllTrails, and CalTopo to navigate in the outdoors. Many of these apps display maps that are based in large part on OpenStreetMap (OSM) data. This is wonderful—we love seeing more people benefit from the incredible work that the OSM community is doing.

However, the popularity of these apps can cause some problems for our National Parks, State Forests, and other public lands. Park visitors often assume that these apps display only official, designated trails, but this is not the case. Unofficial, unmaintained trails, renegade trails, and social trails are regularly included as well. On the maps these look the same as or even more prominant than designated trails, giving more visitors the confidence to follow them, and leading to more visitors lost or in dangerous areas. Another issue is erosion and ecological damage caused by increasing traffic on trails that are not designed for it.

On September 22, OpenStreetMap US hosted a public discussion on the role of OSM trail data in protecting our public lands and helping to keep visitors on safe, well-maintained paths. Keri Nelson, Backcountry Coordinator for the National Park Service Southeast Utah Group, gave a presentation showing a few case studies of OSM trail data leading hikers off trail and into sensitive habitats, protected archaeological sites, or even personal danger. In each case, the hikers were using a mobile app that showed the unofficial or unsafe trail in a way on par with the park’s official trails, which caused them to think that their chosen route was appropriate when it was not. 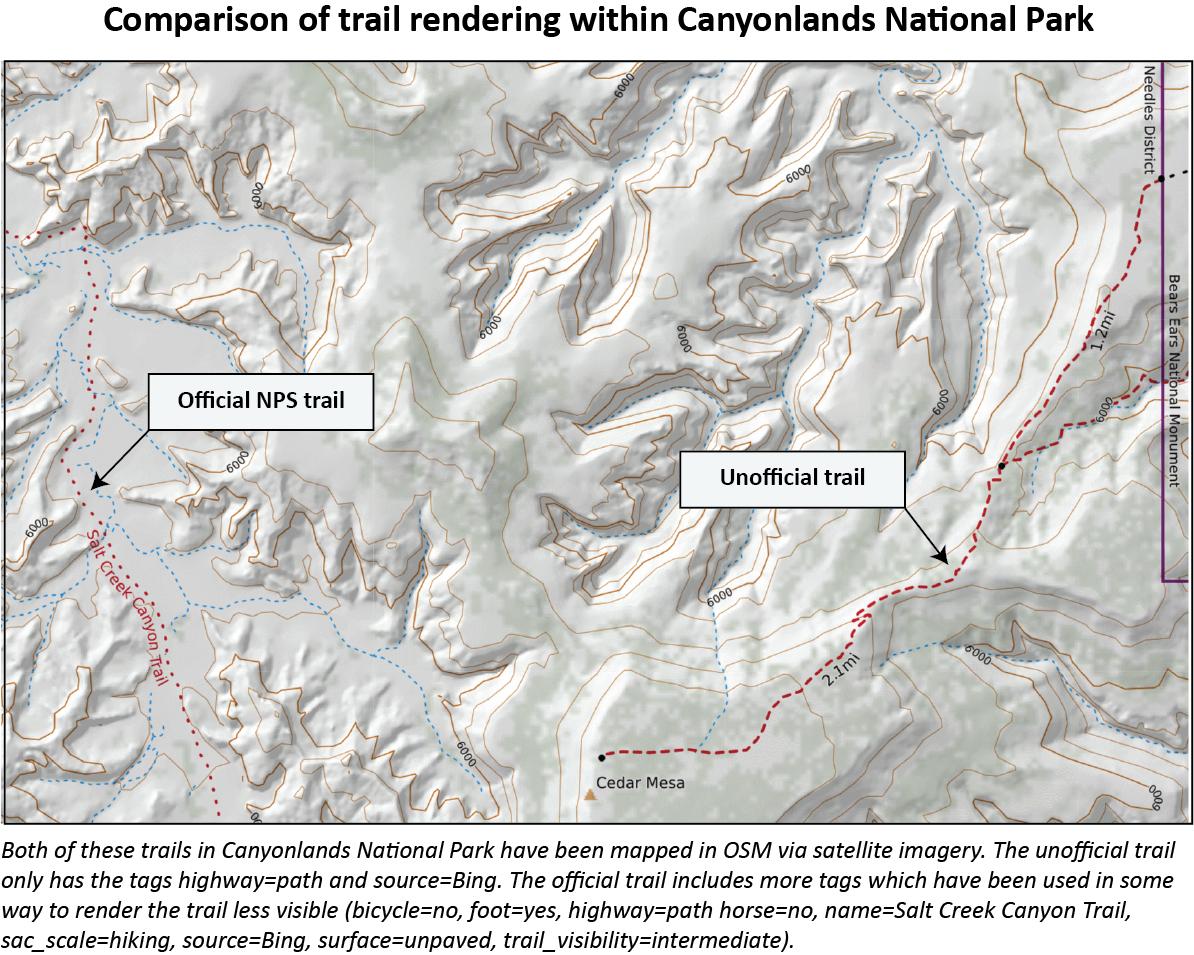 After Keri’s presentation there was time for a discussion about how the OSM community can better support responsible recreation. That conversation evolved into a working group, which met for the first time on October 13, and has met several more times since then. Members of the working group include representatives from the OSM US mapping community, land management agencies including the National Park Service, US Forest Service, and US Geological Survey, and companies that develop navigational apps.

The Working Group’s initial objectives are:

The Working Group does not propose to remove trails from OSM if their use is discouraged or illegal. This would be contrary to OSM’s “Map what’s on the ground” rule, and doesn’t make sense for several reasons:

Our hope is that we can empower OSM contributors to create richer data when mapping trails across the US. Developers of backcountry navigation apps will then be able to use this data to create more detailed and informative maps for their users, which will help people stay safe and protect our public lands.

We’ve been developing ideas on how to tag different types of trails on the OSM Wiki. Have thoughts on this approach or something to suggest? Please add them to the Talk page!

We’ve also been having regular discussions in the #trails channel on the OSM US Slack. Anyone who’s interested in these topics is welcome to join the channel and participate in these discussions. Learn more about who is involved on this Wiki page

We’d love to hear from you, whether you’re an OSM contributor, a consumer of OSM data or a user of OSM-based maps, or work for an organization that manages public land. Thanks to all of those who have joined the conversation so far!